The Fakenham Corn Exchange (now ‘The Hollywood Cinema’) was originally built in 1855 by the Norwich Cathedral Architect, John Brown, It is remarkable for being on an island site with all facades considered as  architecture. The building was surmounted by a glass done supported on  an iron framework to ground level, which together with the use of iron joists supporting the flat roof seems to make it one of the earliest structures utilizing ironwork in this way.

Works to the exterior were undertaken both to make the building sound and watertight as well as to restore it visually as closely as possibly to the original design.    The principle work was a complete renewal of the roof  surface with asphalt and at the same time roof insulation was installed.

Repairs to the badly spalled brickwork included the replacement of splayed plinth bricks in lime mortar as well ass pressure washing the bricks with clean water.

Removing the cementitous paint from the whole of the stonework proved impossible within the budget. Consequently, one bay on the west side was sandblasted and scraped clean, whilst the rest of the stone and rendered panels were painted with a stoe coloured mineral paint by Keim.

Window frames were repaired and where necessary replaced and the original glazing bar pattern restored.  Black glass was used for the main hall, now a cinema, with a layer of sound insulation behind it, whilst the foyer was given clear glass so as to give the building the appearance of use,  Colours used for the paintwork closely follow the deeper shades common at the time of building.

The Norfolk Society, Highly Commended (2001), The Graham Allen Award for Conservation and Design (2001) 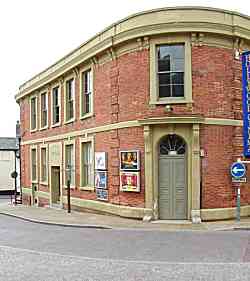 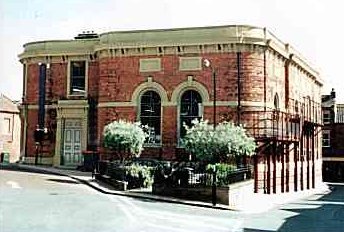